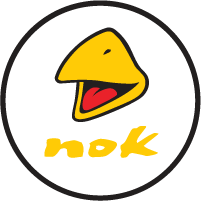 Nok Air (DD) is a low cost carrier airline flying to domestic & international routes. The airline provides the passenger with a cabin baggage allowance of 7 kg and maximum size of 56 cm x 36 cm x 23 cm (L x W x H). The flight ticket fare does not include checked baggage allowance. Airport check in time at the airport starts from 180 minutes before the scheduled departure time. Check in online is possible for flights with the airline on Nok Air official website page. It can be processed 1 days before departure time.

1. Go to the Airpaz site, or access the Airpaz application (Android/iOS) on your mobile phone. 2. Fill in the details in the flight search box. 3. Choose your preferred flight. 4. Fill in the contact and passenger details on the booking page. 5. Process payment through the selected payment method. 6. Get your Nok Air flight e-itinerary in the My Booking page, or in your email.

Payment for your Nok Air booking on Airpaz.com can be made via bank PayPal, credit card, bank transfer, and over the counter methods. For the complete information, visit Airpaz Payment Guide page.

Nok Air (owned by the Nok Airlines Public Company Limited) is a Thai low-cost airline that operates mostly domestic routes from their hub at the Don Mueang International Airport. The airline operates using the IATA code DD, and ICAO code NOK, flying to more than 25 destinations with most being domestic flights and some international flights to Myanmar, Vietnam, and China. The name Nok Air comes from the word ‘nok’ that means ‘bird’ in Thai, a name chosen to represent their values: freedom, air travel, and friendliness. Their friendliness is also apparent in their slogan, “Smiling Across Asia". Their headquarter office is located in Nok Airlines Public Company Limited, 3 Rajanakarn Building 17 Fl. South Sathorn Road, Yannawa, Sathorn Bangkok 10120.

Nok Air was established on 10 February 2004 under Sky Asia Co., Ltd. and started its operations on 23 July the same year. However, the airline was operating under the name Sky Asia Limited, before changing it in 2006 to Nok Air. The budget carrier flied only domestic routes until 2007, where it began its international service routes with daily flights from Bangkok to Bangalore. Currently, the airline serves the largest number of domestic destinations in Thailand with 24 routes. Since 20 June 2013, Nok Air’s share has been traded in the Stock Exchange of Thailand with the name Nok Airlines Public Company Limited, and trading symbol NOK. As of January 2019, the biggest share owner is Mr.Nuttapol Jurangkool at 23.77% followed by Thai Airways International PLC at 21.80%.

If you have questions for the airline or are facing issues during your flight such as lost baggage or delayed flights, you can contact the airline. You are able to contact Nok Air through various channels, such as the social medias, call center, and the head/representative office. The address of the head office is Nok Airlines Public Company Limited, 3 Rajanakarn Building 17 Fl. South Sathorn Road, Yannawa, Sathorn Bangkok 10120. As for the China Representative Office, it can be found in the Rm 1009A Main Tower, GuangDong International Building, No.339 Huan Shi Road, Yue Xiu District, Guang Zhou, Huang Dong province, PRC. Another option is to go to this page to fill in the feedback form for the airline.

The airline provides cabin and hold baggage allowance for the passengers, although it depends on the ticket fare of the passenger. For the hand baggage allowance, it depends on the aircraft used on the route. For flights operating on Boeing 737, the baggage size should not be more than 56 x 36 x 23cm. For flights operating using ATR/Q400, the cabin baggage size should be under 50 x 36 x 23cm. Each passenger is only allowed to bring one baggage to the cabin of the aircraft following the baggage size policy, and not weigh more than 7kg. Item that does not fit in the cabin storage compartment or under the seat in front of you, or overweight, shall not be brought onboard and be stored in the cargo.

If you plan to bring more baggage than the allowance weight, you can purchase extra baggage allowance on their website. The purchase should be made at least 24 hours prior to the departure through the website or the call center, and you can check the additional cost for the allowance here For a complete guide on the restricted or prohibited goods during the flight, such as liquid, alcohol, batteries, stove, etc., click here. If you plan to bring your pet(s) with you, the airline offers pet carriage service and you can read the full information and policy here Information stated above is intended for general guide only, and may be changed by the airline with no prior notification. Contact the airline or check the airline’s official page for the cabin baggage allowance here or here for the checked baggage allowance. 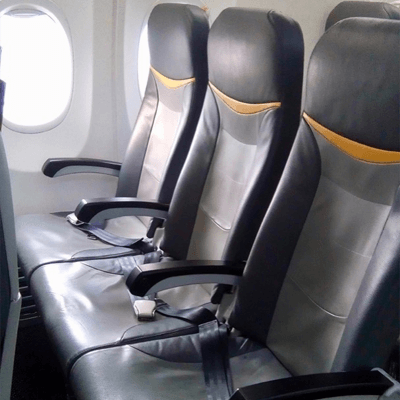 Passengers flying with Nok Air can choose where they want to sit during the flight from 90 days to 4 hours prior to the scheduled departure time. The standard legroom for the seats is 28" - 31". On Bombardier, there are only Nok Happy Seat while on the Boeing aircraft there are two seat types: Nok Happy Seat and Nok Premium Seat. The Nok Premium Seats are in the front row, in the emergency exit rows (30-35 and 44-45) with additional conveniences and services from the airline such as priority check-in, boarding and baggage, along with hot tea or coffee on board. The extra comfort and conveniences will be added with extra fee.

During flights with Nok Air free snack/beverage is not available. 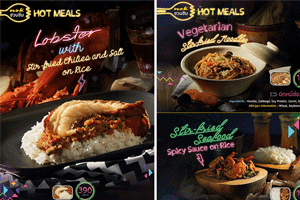 Inflight meal is not available to order with Nok Air. 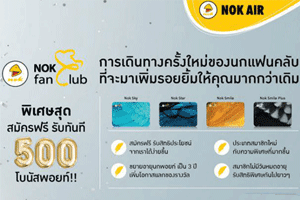 Nok Air has a privilege program for their customers, and further information on it can be accessed here.

Nok Air provides a variety of check-in options to make any trip of you become a seamless travelling experience. Find the best of check-in choice to fit your lifestyle. 1. Airport Check-in. 2. Mobile Check-in. 3. Web Check-in Note : All information can changes at anytime without prior notice, click here.

Web check-in is available from 24 hours to 1 hour before the scheduled departure time. If you buy your ticket less than 24 hours prior to the flight departure time, you can check in half an hour (30 minutes) after your reservation is made. You will be able to choose the seat on the website while checking in.

Nok Air does not provide kiosk check in services for the passengers.

Passengers can check in using the mobile app on your online Android or iOS gadget. Mobile check-in is available 24 hours to 45 minutes prior to the scheduled departure time. The boarding pass will be downloaded and saved to your gallery so you don’t have to be connected to the internet the whole time.

Passengers flying with Nok Air are allowed to make changes to their flight ticket reservation, such as reschedule, postpone, or name correction/name change. However, changing routes or destination is not possible. Ticket cancellation is possible, but refund is not possible. To change your itinerary (any change on your flight ticket), you will be charged with service charge fee of THB 225 per passenger for every passenger per booking. If there are changes with the price of the ticket, it will also be charged to you. You can make the changes through their call centers, or at the airport ticket counter at least 24 hours before the original departure time. The passenger can also change the name on the ticket by contacting the call center, or at the airport ticket counter. The change should be made at least 4 hours before the departure time, and on top of the THB 225 service fee, there is Passenger Name Change Fee: THB 750 for Domestic flights and THB 1,210 for International flights. For passengers flying with infant(s), there is a different child and infant policy that has to be followed and you can access here. If you need an insurance for your flight, you can click here for the airline’s insurance: Nok Sure. The airline may change its policy without any prior notification. To get an update when it happens, and for their policy on insurance, flight delay, etc., check the airline’s fare rules page for airline here.