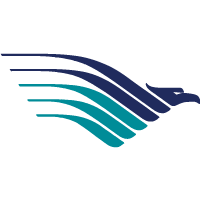 Garuda Indonesia (GA) is a full flight airline operating domestic & international routes. The cabin baggage allowance given by this airline is 7 kg and max size of 56 cm x 36 cm x 23 cm (L x W x H). The international route fare includes checked baggage allowance of 23 kg while the domestic route ticket fare includes free checked baggage allowance of 20 kg. Passengers can check in at the airport 180 minutes prior to the scheduled flight departure time. Online check in is available for flights with the airline on Garuda Indonesia official website. It can be done 2 days prior to scheduled flight departure time.

1. Visit Airpaz website, or open the Airpaz application (Android/iOS) on your gadget. 2. Fill in the flight details in the flight search box. 3. Choose your perfect flight. 4. Fill in the contact information and passenger details on the booking page. 5. Process your payment through the selected payment method. 6. Receive your Garuda Indonesia flight e-itinerary in the My Booking page, or in your registered email.

The payment for your Garuda Indonesia booking on Airpaz can be made via bank credit card, PayPal, bank transfer, and over the counter methods. For the complete information, visit Airpaz Payment Guide page.

Garuda Indonesia is a full service Indonesian airlines that do not only serve domestic flights in Indonesia but also international routes. By September 2018, Garuda Indonesia serves 91 destinations all over the world – 69 domestic and 22 international destinations. The destinations include Asia (Regional South East Asia, Middle East, China, Japan, and South Korea), Australia and Europe. The amount of destinations and inflight facilities offered by the airline are completed by three different cabin class for their flights. Garuda Indonesia offers Economy, Business, and First Class experience for the passengers. As a form of concern for safety, Garuda Indonesia has been awarded the IATA Operational Safety Audit (IOSA).This proves that the airline is in compliance with international standards in the field of safety and security. To improve service, Garuda Indonesia has launched a new service called "Garuda Indonesia Experience". This new service offers a concept that reflects the genuine hospitality of Indonesia in all aspects. To support this service, all new fleet equipped with the most cutting-edge interior, which features individual touch-screen LCD TVs throughout Executive and economic class. In addition, passengers are also pampered with Audio and Video on Demand (AVOD) entertainment system which offers a wide selection of movies or songs, as voted by each passenger. Garuda Indonesia has managed to turn its bow, so as to avoid failure in times of crisis and achieve success in the era of 2006 to 2010. After going through hard times, now Garuda Indonesia to continue its success with running the 5-year expansion program aggressively. The program is known as the 'Quantum leap'. The program is expected to bring the company into larger, with a wider network and accompanied by an increasingly better quality of service. Since then, Garuda Indonesia have been awarded by various organizations and agencies. Other than giving it a 5 Star rating, Skytrax have awarded the airline "The World's Most Improved Airline". Subsequently in July 2012, Garuda Indonesia received the award for "World's Best Regional Airline" and "Best Regional Airlines in the World". A consulting agency called the Centre for Asia airlines Aviation (CAPA), which is based in Sydney, also gave awards to Garuda Indonesia as "The Most Changing Policy of the Year" in 2010. While Roy Morgan, an independent research institute in Australia, also give awards to Garuda Indonesia as the "Best International Airline" in January, February and July 2012. It has received "The World’s Best Cabin Crew" award for five years in a row starting from 2014 from Skytrax, and one of the Top 10 World’s Best Airline 2018. Apart from its core business as an airline, Garuda Indonesia also has a business unit (Strategic Business Unit / SBU) and its subsidiaries. The business unit is Garuda Cargo Garuda Indonesia and Garuda Medical Center. Garuda Indonesia group also has subsidiaries such as PT Garuda Indonesia Citilink, the low fare airline (Low Cost Carrier), Aerowisata (Hotel, Ground transportation, catering and travel agents), PT Abacus Distribution Systems Indonesia (ticket reservation system provider), PT Aero Systems Indonesia / Asyst (provider of information technology services to industry and transportation pariwisata) and PT Garuda Maintenance Facility (GMF), which is a company engaged in the field of aircraft maintenance, repair, and overhaul. Another thing to note is that the airline is the first Indonesian airline to be a member of the SkyTeam. The partner airlines include AirEuropa, China Airlines, Aeroflot, Aerolineas Argentinas, KLM, Korean Air, etc. Garuda Indonesia currently has three hubs in Indonesia. The first is the business hub located at Soekarno-Hatta Airport, Jakarta. The second is a tourism hub in the region at the Ngurah Rai Airport, Denpasar, Bali. Then to increase flight frequency to eastern Indonesia, Garuda Indonesia also has a hub at Sultan Hasanuddin Airport, Makassar, South Sulawesi. The main office for this airline is located in the Soekarno-Hatta International Airport, at the Management Building, Garuda City.

Garuda Indonesia (IATA Code: GA & ICAO Code: GIA) first flew its commercial flight on January 26, 1949. It was from Calcutta to Rangoon, using a DC-3 Dakota Aircraft with the number RI 001 and under the name of Indonesian Airways. However, its first flight that used the name Garuda Indonesia Airways on it was the flight from Jakarta to Yogyakarta on December 28, 1949. The DC-3 aircraft listed as PK-DPD’s task was to pick up President Soekarno. The name "Garuda" itself was also given by President Sukarno, taken from a Dutch poem written by Noto Soeroto: "Ik ben Garuda, Vishnoe's vogel, die zijn Vleugels uitslaat hoog bovine uw einladen", which means, "I am Garuda, Vishnu's bird that spread its wings high above your islands". In 1950, Garuda Indonesia officially became a state owned airline in Indonesia that operated a fleet of 38 aircrafts that included 22 DC-3, 8 Convair 240, and 8 Catalina Flying Boat. It continued to grow, and made its first commercial flight to Mecca for the Indonesian hajj pilgrims in 1956. On the same year, it also flew the first flight to Europe with Amsterdam as the destination. During the 1980s, GA conducted large-scale restructuring that includes the fleet operations. During the time the company developed comprehensive training programs for both the air and ground crews. It also established a training facility for the crews in West Jakarta, the Garuda Indonesia Training Center. The development and restructuring went on, and in 2005 a new management took office. They did a re-evaluation and another restructuring that was aimed to improve the efficiency and service to the customers. After the successful completion of the restructuring, Garuda Indonesia went public on the 11th of February 2011 with the initial public offering of 6,335,738,000 shares.

Currently, the average age of the Garuda Indonesia fleet is 5.4 years, although the airline do have an ongoing program of fleet expansion, acquiring newer aircrafts to expand. Their current fleet is comprised of various aircrafts from Boeing to Airbus and Bombardier.

If you have questions for the airline or are facing difficulties in the airport such as delayed flights or lost baggage, you can contact the airline. One of the ways to contact the airline is by sending an email to customer@garuda-indonesia.com. The Garuda Indonesia call center can be contacted on one of the following numbers :

Cabin baggage should be labeled, although it is still in the full responsibility of the passenger carrying it to the cabin. Its maximum length is 56cm, width 36cm, and depth 23cm. Another way is to sum the three dimensions, which should not exceed 115cm or weigh more than 7kg.

For passengers who brought more baggage than the baggage allowance, there is an extra baggage rate that depends on the route that they take. For a more complete information on the fee, you can click here. For a cheaper fee, you can also purchase the extra baggage allowance in advance from either the website, ticketing office, or mobile applications. The complete table of the prepaid excess baggage fee for both domestic and international flights can be seen here Disclaimer: Information stated above is intended for general guide only, and may be changed by the airline with no prior notification. Contact the airline for further information. 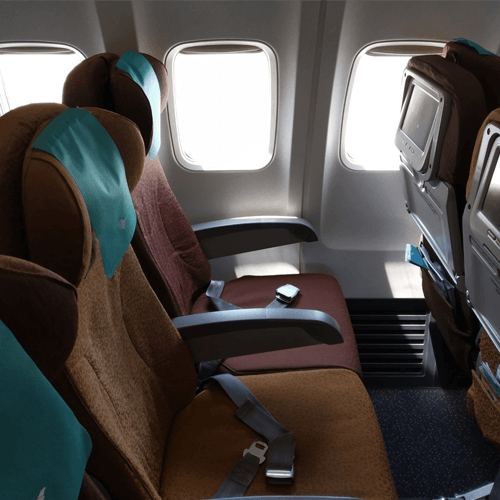 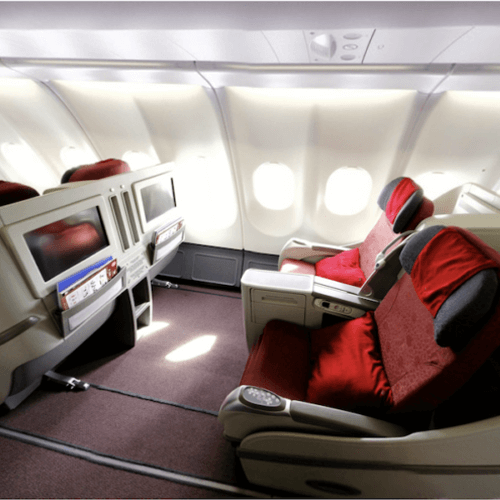 The size of the standard seat for the Business Class in Garuda Indonesia is 73" seat pitch and 19" seat width. 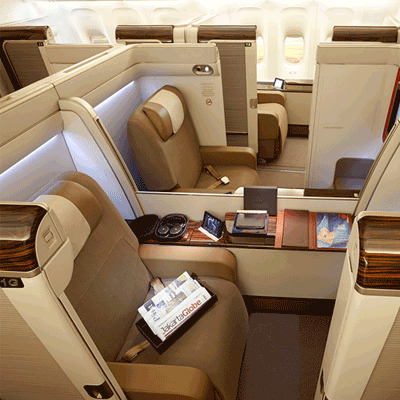 The size of the standard seat for the First Class/Executive Class fare in Garuda Indonesia is 82" seat pitch and 22" seat width. 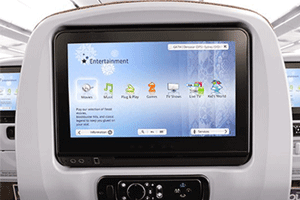 There are various inflight entertainments that can be enjoyed by the passengers, ranging from audio and video on their touch screen LCD TVs. Various films and TV shows are also included in the choice, along with interactive games and Live TV choices. However, not all flights will be able to enjoy these entertainment. The Live TV service is only available on most flights using Boeing 777.

During flights with Garuda Indonesia free snack/beverage is available. 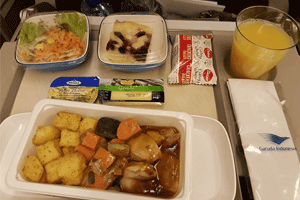 Garuda Indonesia offers European and Eastern meals in their flights be it domestic or international flights. There are also special meals that can be ordered 24 hours before the departure via the Contact Center, Garuda Indonesia office, or your travel agent. 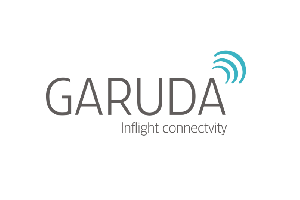 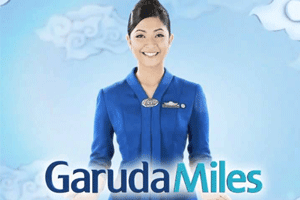 Privilege program is available for the loyal customers of Garuda Indonesia, and more complete detail on it can be read here.

Just like other airlines, Garuda Indonesia also provides an online check-in service for its passengers at least 4 hours (international route) and 2 hours (domestic route) prior to the departure time.

Check-in counters for Garuda Indonesia opens 3 hours to 1 hour before the scheduled departure time. You are advised to check in at least half an hour before the check in and baggage drop counter at the airport closes.

Kiosk Check-In is available from 4 hours to 1 hour prior to the scheduled departure time, and is currently only available for domestic flights (except for the one at the Schiphol Airport). It is also not available for passengers who need special assistance at the airport. That includes expecting mothers, children under 12 travelling alone, Unaccompanied Minor, and passengers who need to use wheelchair or stretcher case. Group passengers with more than 9 people under 1 PNR, passengers with Eco-Basic ticket, and any passenger without e-ticket also cannot use this service. Passengers who cannot use any of the services mentioned above should go to the check in counter at their respective departure airport and check in there.

App check-in through the airline’s official mobile (Android/iOS) application is possible. To do so, download the Garuda Indonesia mobile application on their gadget. The check in time is 24 to 4 hours before the flight departure time.

Changes such as reschedule can be made to the ticket by directly contacting the airline. For further information on Garuda Indonesia flight tickets and fare rules, click here. Disclaimer: The airline may change its policy without any prior notification. To get an update when it happens and for their policy on insurance, flight delay, etc. check the airline’s fare rules page or directly contact the airline.