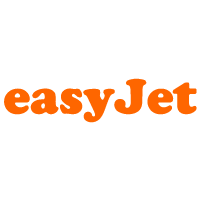 EasyJet SA (DS) is a low cost carrier airline flying to domestic & international routes. The cabin baggage allowance given by this airline is 5 kg and max dimension of 56 cm x 45 cm x 25 cm (L x W x H). The ticket fare does not include free checked baggage allowance. Airport check in time at the airport starts from 120 minutes before the flight departure time. Online check in is possible for flights on EasyJet SA official website page. It can be done 30 days before departure time.

1. Go to Airpaz.com, or open the Airpaz application (Android/iOS) on your gadget. 2. Fill in the flight details in the flight search box. 3. Choose the best flight. 4. Fill in the passenger detail and contact information on the booking page. 5. Process payment through the selected payment method. 6. Receive your EasyJet SA flight e-itinerary in the My Booking page, or in your registered email.

Payment for your EasyJet SA booking on Airpaz can be processed via bank credit card, PayPal, bank transfer, and over the counter methods. For a complete information, visit Airpaz Payment Guide page.

The airline started as TEA Switzerland, providing charter flights for various European destinations. 40% of its stake was then purchased by EasyJet in 1998, and it began operating under the EasyJet franchise in 1999. EasyJet Switzerland SA also operate as EasyJet, although its IATA and ICAO codes are different than the EasyJet UK. It’s IATA code is DS, while its ICAO code is EZS. It operates the flights from both the Geneva Airport and EuroAirport Basel-Mulhouse-Freiburg. It flies not only to Schengen but also non-Schengen countrues.To list some of the company’s international CH flight destinations are France, German, Greece, Sweden, and Switzerland. The low-cost model of the airline allows it to really grow. Currently not only is it known as the biggest low-cost airline, it is also named the best-value airline in the UK by Skyscanner in 2018. The airline’s growth can be attributed to the low flight cost that attract customers. EasyJet also partners up with other airlines to better serve its passengers through long-haul connection or partner direct flights to other cities. Their newest airline partner is Virgin Atlantic, although they have also partnered up with Norwegian, WestJet, Thomas Cook, Corsair, La Compagnie, Loganair, Neos, and Gatwick Connect in their EasyJet Worldwide program.

EasyJest was established in 1995 by the Greek businessman, Stelios Haji-Ioannaou. It started flying with two leased Boeing 737-200 aircrafts in two routes: London Luton Airport to Glasgow and Edinburgh. In 1996 their first aircraft was delivered, allowing them to start their international flight route to Amsterdam. Despite having been operating for two years, until 1997 the airline actually had not operated their flights. All flights before October 1997 were operated by GB Airways and AirFoyle because they had not received Air Operator’s Certificate. In March 1998 EasyJet purchased 40% stake in TEA Basle, a Swiss charter airline. The airline was then renamed EasyJet Switzerland, as its first franchise.

All of the airline’s crew wear uniforms that incorporate its signature orange colour. The female flight attendants wear a sharp knee-length dress with an orange belt and a scarf that match, while the male flight attendants wear a set of sharp grey suit with an orange patterned tie. The uniform was designed in cooperation with ICW Incorporate Wear in 2013.

Currently, EasyJet’s fleet is completely comprised of Airbus aircrafts ranging from the A319 to A321neo.

If you have questions for the airline or are facing issues during your flight such as lost baggage or delayed flights, you can contact the airline. There are various ways to contact EasyJet Customer Service, from the Live Chat feature in their website, to online form and through the Call Center. However, both the Live Chat and Call Center are only open from 8AM-8PM local time, depending where you contact them from. The airline contact support can be contacted on one of the following phone numbers:

For passengers who want to use the Live Chat and e-Form, you can visit their website here.

All passengers flying with EasyJet get ONE cabin bag allowance that has no weight limit, as long as the passenger can lift it to the overhead compartment by themselves. However, you also have to be careful since there is only room for up to 70 cabin baggages for every flight. The rules also include the maximum measurement of the bag/suitcase: 56x45x25cm including the handles and wheels. If the luggage intended to be put in the cabin don’t fit, it will be put in hold and can be collected from the baggage carousel in the arrival terminal. Since they also check the bag sizes before boarding, make sure that your bag/suitcase/carry on luggage size is not bigger than the allowance mentioned before. If your bag is bigger,it will be checked in for an extra charge. Flexi, Upfront, and Extra Legroom passengers can bring a cabin baggage plus handbag or laptop bag in maximum size 45x36x20cm that can fit under the seat in front of you. EasyJet Plus cardholders can also bring a hand luggage and handbag on board.

Free checked baggage allowance is not available for the passengers flying on EasyJet SA.

If the cabin baggage allowance is not enough, you can also purchase hold baggage allowance to add baggage. All passengers including children and infants can buy up to three extra luggage that weigh 32kg each at max. The extra baggage cost varies according to the weight and flight route, which will be determined when you make the purchase either online or at the airport. The hold luggage allowance cost estimation and other details can be seen below. However, there are item limitation rules that applies to all baggages brought on the flight both in the cabin and the hold. Some items such as liquids, aerosols, gels, drinks, and cigarettes are classed as restricted items that follow additional rules. For liquids, aerosols, and gel items such as makeup and perfume, the rule is to put it in a container of 100ml or less and inside a transparent, resealable 20cm x 20cm bag. Each passenger has 1,000ml fluid hand baggage allowance to bring to the cabin baggage. But, the 100ml liquid limit does not apply to baby milk and sterilised water for babies although it still applies for baby food. Passenger travelling with baby can bring baby food, milk and sterilised water in their cabin bag as long as the total amount is not more than 1 litre, and placed inside resealable plastic bag no bigger than 20x20cm. Passengers are allowed to bring some sharp objects such as tweezers, scissors with rounded ends, and knives/blades less than 6cm long. Razor blades are also allowed in the cabin if they are set in plastic. For a more complete dangerous goods restrictions, click here Disclaimer: Information stated above is intended for general guidance only, and may be changed by the airline with no prior notification. Contact the airline for further information. 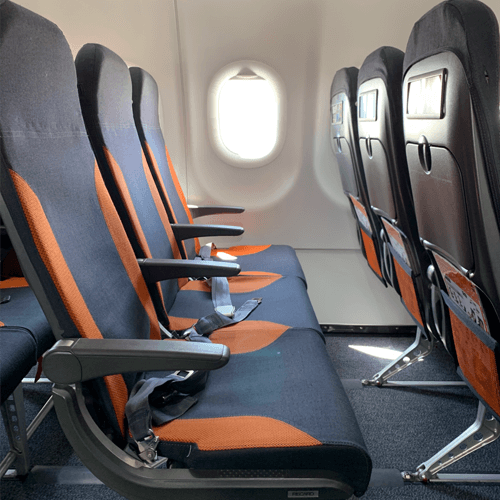 All passengers are automatically assigned a seat in the airplane when checking in, although you can also choose your own seat by paying an extra fee. 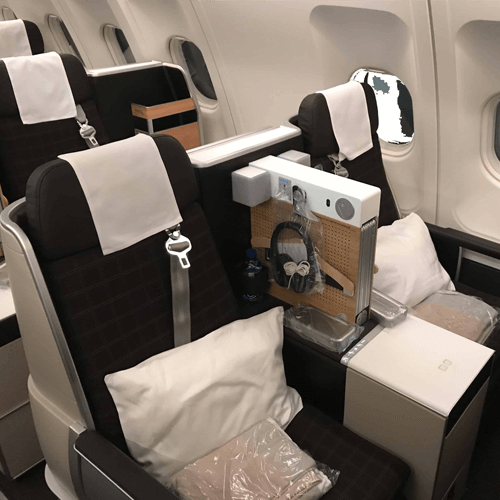 The standard seat size of the EasyJet SA Business Class is 20 inch.

Free snack/beverage is not available during flights with EasyJet SA. 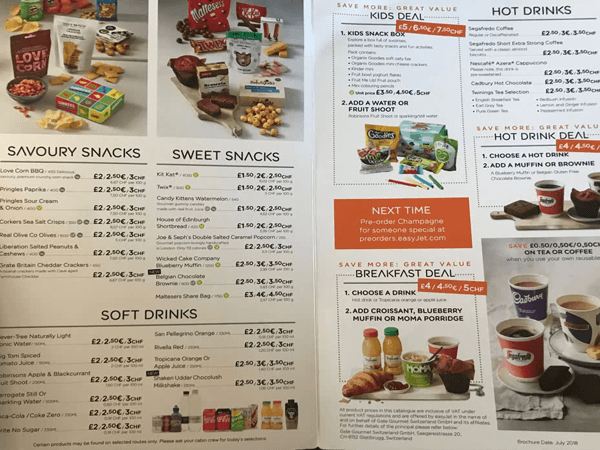 The airline also provides meals and beverages that you can either purchase on-board or prior to your flight. However not all meals and beverages may be available on your flight, while pre-ordering your meals will guarantee your selection. If you still prefer buying your meal during the flight, you can purchase 20% off voucher (£5 for £4) on their website here You can print the voucher and show it when you buy the meal to use it. To browse their full menu, click here. 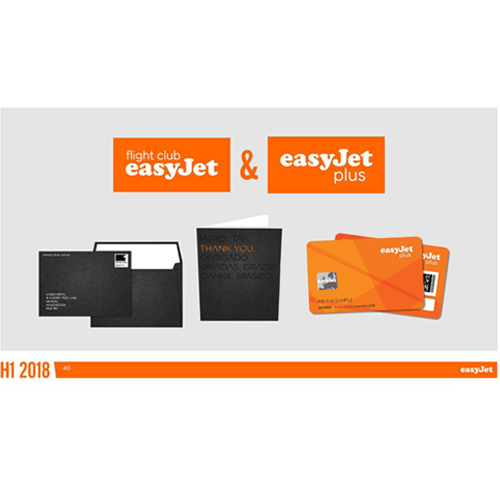 EasyJet SA has a privilege program for their customers, and further information on it can be read here.

To do web check in, go to the check in page on their website here. However since your boarding pass will be downloaded as pdf, you have to print it out. The airport security team cannot scan your boarding pass on your mobile device if it’s in the form of pdf. The time for online check-in 30 days to 2 hours before your flight departs.

If you have any difficulty, you can check-in at the airport between 2 hours to 40 minutes before departure.

Kiosk check in service is not available for passengers of EasyJet SA.

For a no-hassle check in, you can download the EasyJet mobile app on both your iOS and Android gadget. This will allow you not to print out the boarding pass, and instead download it to your gadget. It will be saved offline, so you don’t have to worry about Wi-Fi or roaming charges if you’re flying abroad. Once you save it, you can scan it at the Bag Drop desk, Security checkpoints, and the gate. You can use the mobile app to check in on all airports where EasyJet flights depart, except at Belgrade, La Rochelle, Oslo, Agadir, Essaouira, Hurghada, Marrakech, Pristina, Izmir, Antalya, Bodrum, and Dalaman. The time for mobile check-in 30 days to 2 hours before your flight departs.

All tickets are non-refundable, although there are some exceptions in its cancellation policy. If you decide to cancel your ticket within 24 hours of booking, you will get a full refund minus the cancellation fee. And although the airline does not offer refund, you can reschedule, reroute, and even change the name on your ticket as long as you pay the fee for the changes that you can see below. If your flight happens to be delayed, the airline has its own delay compensation policy. The compensation offered ranges from refreshment vouchers to ticket refund that differ based on the route and the length of delay time. Although you cannot cancel and get a refund for your flight ticket, the cancellation policy is different when the airline is the one cancelling the flight. In this case, you can either transfer to another flight with the airline for free, or get a refund. - If you book the flight directly with EasyJet, log into the website using your email address, password, and booking reference number. Go to Manage Booking, and continue from there. - If you book through travel agent and want to change flight, go to the Ground Crew. For cancellations and refunds, you have to contact the Customer Service team. If your flight is delayed or cancelled and you need overnight accommodations, the airline will arrange it for you. For more information on EasyJet delay and cancellation policy, click here To check if your flight is going to be on time, delayed, or cancelled, prepare your flight number and find it on this official EasyJet page